The Lake of Stars

Melting on the bed, sweat seeping down to the covers, wishing for air conditioning or a fan at least to cool down, I decided the risk of bilharzias was minor compared to the danger of instantaneous combustion.  Through the window, beyond the heat shimmering sand, Lake Malawi glittered invitingly.    Hopping from one foot to the across the sun blasted beach I reached cool waters and lowered sautéed soles into the water.

I swam in waters that Dr David Livingstone ‘discovered’ about 150 years ago on his travels.  Asking local indigenous Chewa people what they called this vast lake, they replied ‘Nyanja’ or as he called it “Nyasa”.    Because he had not mastered the local language (a common malaise of many travellers) and since English was not the second language of Malawi education system at the time, he failed to grasp that Nyanja meant ‘lake’.    So from that moment until 1964 the impressive 500km long stretch of water and possibly one of the biggest inland lakes in the world was called Lake Nyasa or “Lake Lake”!   Strangely Malawi appeared to be less than happy with the title and at independence   renamed it Lake Malawi, which in Chichewa means ‘reflected light (hence its nick name Lake of stars), haze, flames or rays.  Any of which have to be a much more accurate and poetic description than Lake lake.

We arrived in Chitimba by local Matola.  The sign in the bus said “maximum amount of passengers 16” .  The guy in  fatigues lounging in the back and toting an army gun and the numerous police at the many check points appeared to be short-sighted or unable to add up..  I counted at least 25 of us at one point crammed into the small space plus poultry.  There appeared to be no guidelines for animals so wrapped in shawls or crammed into baskets, glaring beady eyed heads sticking out they accompanied us on our way.

If there was ever a place to see how local people live without the trappings of tourism Chitimba is the place.   There is a run down school and medical clinic, a shed making homebrew, a couple of shacks called shops, fruit and second hand clothes market, a couple of small cafes and a pub that belts disco where all the unemployed local lads tend to start drinking about 9.30am in the morning.  All are strung along a 2km stretch of road.   Rutted sandy paths turn off the highway heading towards the beach and camping grounds. 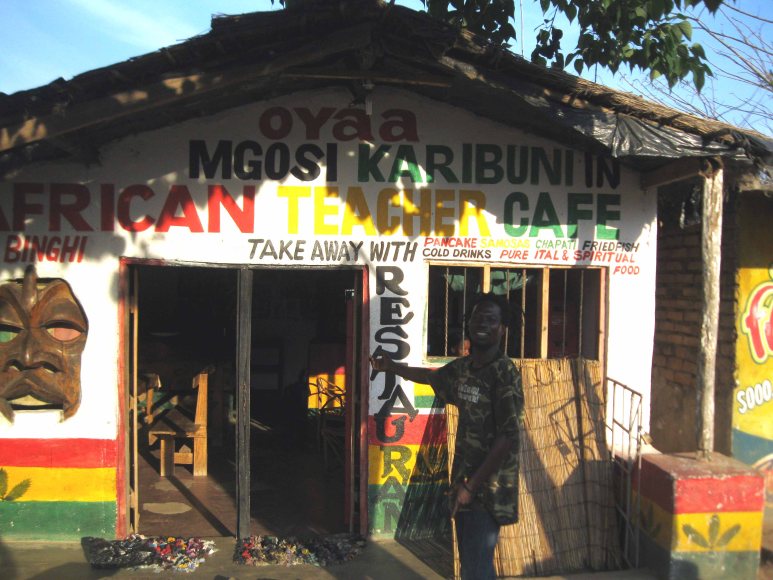 Of course there is a reason to go there.    Livingstonia.    Although Livingstone’s attempts to set up missionaries in Malawi failed, others followed.  They originally settled in  Cape MaClear, moved to Bandawe and ended up in the cool, high malaria-free reaches above Chitimba and a  mission still exits today.   Stunning views of the bay and mountains, a cool climate, waterfalls, remote and quiet , good food provided by eco friendly accommodation and their perma gardens all add up to a wonderful place to chill for a few days.

To the cheers of passengers (more space for all) handshakes and waves, we fell out of the matola.   Homeboy and his brother, Mr Obvious, appeared by our side and accompanied us down the hot sandy 500 meter track to our accommodation on the beach.   Conversations about education, work, family,  community,  health were interspersed by heavy panting as I staggered under the weight of the backpack.   I would have gladly parted with money if one of them had offered to take the baggage off me but strangely enough they didn’t see the cash cow moment being more intent on showing off their woo caving stall, one of many that lined side of  the path leading  to a large gate blocking  the way. 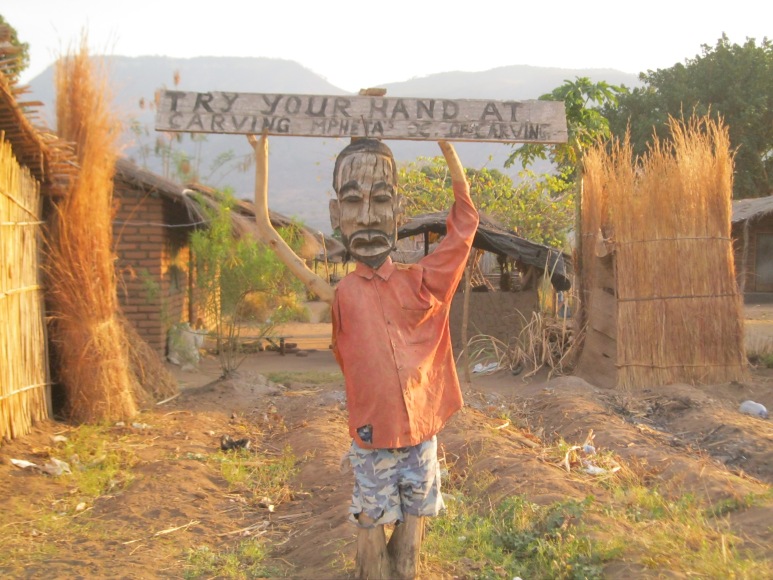 Next to our accommodation was another camp site which was much more basic.   However, as we were to subsequently find out, Willie and Maggie were 100% more welcoming and friendly,  the shower and toilet blocks were brighter/cleaner and  the food Maggie cooked was delicious.  Next time we will stay there.

Back at our place we met up with a couple of like-minded fellow  travellers and agreed to head off together to Livinstonia the next day.  A  three to  four hour walk up hill to Lukwe Eco Lodgeor, if we were lucky, a lift up the hot unpaved road in a 4W drive by one of the locals.  There were no guarantees of a ride so it was going to be an early start.