The Land of Grins

People are incredibly friendly here, they want to talk for the sake of talking rather than making a buck out of the tourist.    Twice we were upgraded to awesome rooms, ending  up with a room with a view plus en suite in both cases at no extra cost.  There are some good deals  to be found if you look around.

At Nkhata bay Myoka Village Beach Hotel , not only were we upgraded but wi-fi was free, there was a free boat trip every Tuesday around the coastline which afforded close up encounters with sea eagles, free monthly moon party trips, free tea and coffee and cake at 16.00, great ambience and good food.  Chief Nyirenda, decked out daily in  freshly pressed safari outfits that come in a variety of solid colours including dusty pink and plum  (Matching  hat included)  installs  himself in his chair in the restaurant with his mobile chocolate and sweet shop at night.  He joined us for dinner and we were regaled with stories of his childhood, pioneering  father (one of the first black doctors in Malawi who studied at Livingstonia  hospital), and his many offspring who are now chiefs, doctors, politicians and lawyers themselves. 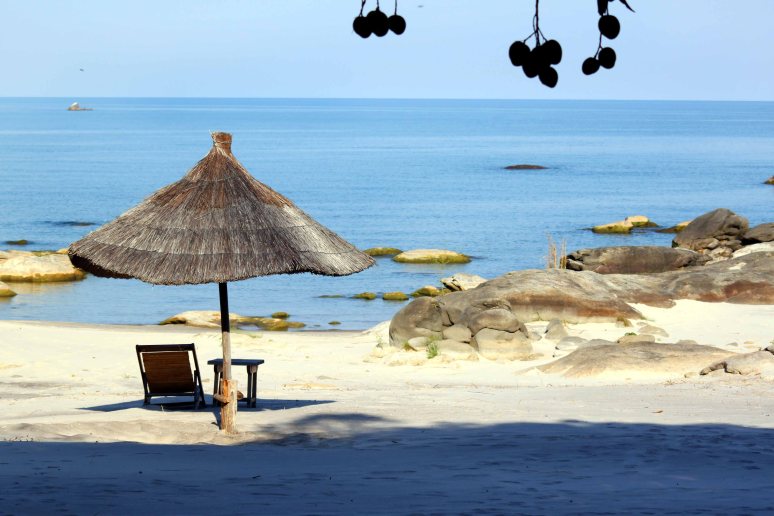 We moved onto the Chintheche strip and to Makuzi Beach Lodge (a private beach resort) where we aimed to camp.

“Say hello to my son” said the chief

We arrived at the crossroads to the lodge, where we were picked up by Loren the manager.

“I’ve upgraded you” she said “couldn’t be bothered to put up the tent for a few days.  We have put you in a lodge with ensuite for the same price” “Beach front view”

And it got better , we met a couple that gave us a ride all  the way to Lusaka in Zambia and refused to take any money for petrol.

Some people are so generous. 🙂