The Long Trek Down – Cabanaconde and the Colca Canyon, Peru 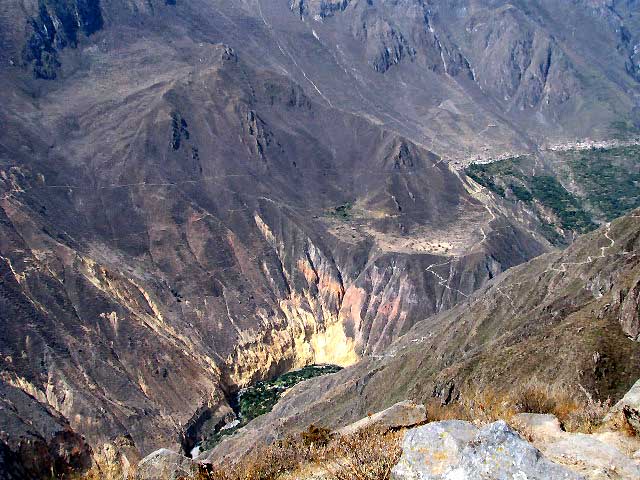 Oasis at the bottom of the Colca Canyon

We arrived in Cabanaconde and disembarked in the mid heat sun only to be assailed by a Scottish girl who had married one of  the local hostel owners.  Thrusting a leaflet in our face she commenced her spiel but as I’d already done my homework about hostels in the area and read reviews about Pachamama, I knew it was drunk noisy at night and wasn’t that bothered.  However, I had a look around anyway, decided that a pool table and bar below the rooms wasn’t conducive to a good nights sleep and it was way too expensive for a room with shared facilities.    The husband started to get pushy and as I  left said sarcastically

‘well if you want a five star hotel you’re not going to find it around here’.

“I don’t need 5 stars just directions to the Santa Anna hotel which is cheaper, quieter and has ensuites” I replied.

That shut him up!

That evening we went for a walk around the village and ended up at the viewpoint just outside which overlooked the Colca Canyon – while we were there at least 5 condors soared out of the valley and cruised the thermals above us.

Later on we spoke to travellers who had risen early to get up to the look out point and had seen nothing  – talk about luck.  We had a good view of the destination we were headed for the next day as the sun shone down into the canyon and lit up the Sangalle (oasis) at the bottom.    Heading back into town we wandered around the streets and absorbed village life before heading back to the room to watch the sunset over the village.

It was freezing at night,  Thank god we had our thermals and woolly gloves and hats.  The best place to eat was the cosy hostel Valle del Fuego run by a Frenchman and his Peruvian wife.  It had a roaring fires which kept the cold at bay and a good selection of food.   As it was so cold we decided that spending a night at the oasis was not an option so we decided to get up early and do the Canyon in one day. 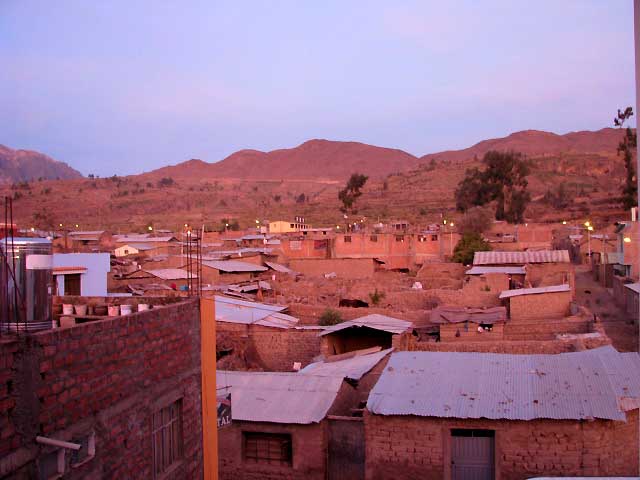 The two – three hour trek to the bottom is tough but not unachievable – the problem, for an unfit person like myself,  is the altitude.  But there are plenty of exhausted backpackers to meet along the trail who offer lots of encouragement and share water if needed.  Try to ignore the locals who bound up and down with donkeys, food, furniture and white goods – yes I did see a fridge being taken down by 3 men and no  I was not hallucinating!      The views are spectacular and there is plenty of photo opportunities – including the Inca terracing cut into the mountain sides.  As the bottom nears the ochre, amber/yellow and red colours of the sheer rock walls enhance the lush green oasis with its clear blue swimming pools. 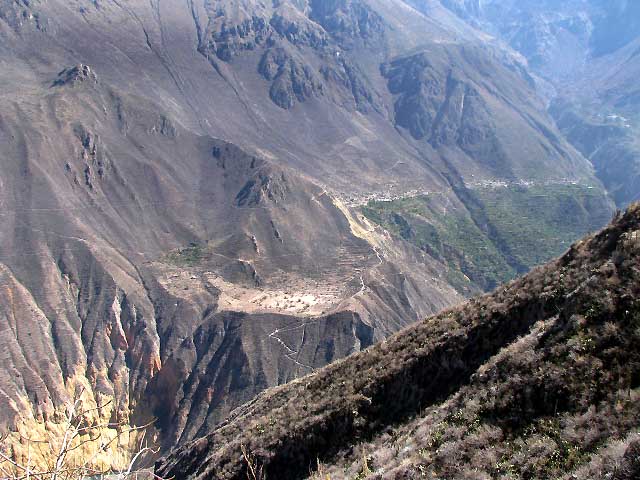 Once at the bottom there are rough shacks to stay in over night, a small restaurant and pools to swim in.  Lunch is good value but the drinks are expensive so plenty of water is essential.  The swim was welcome but the midges are vicious so repellent is also a must have item.

Before heading back up the mountain we had a wander down by the river and I found of all things a tomato plant growing in between the rocks – bizarre! 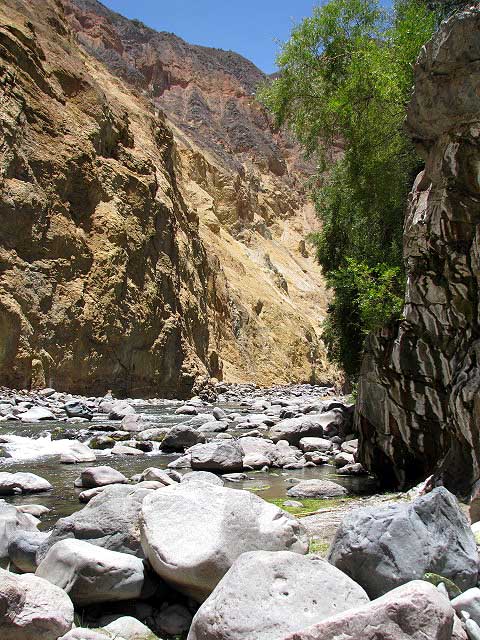 Due to the high altitude the return trip was hellish.  Hot, thirsty, long and slow.  Locals ran past us (down and up), donkeys trotted past and kicked up clouds of lung clogging dust, the guys with the fridge were on their second trip back down this time with a generator.  Resisting temptation to flag to down the 4.00 oclock ass train ferrying tourists back up the mountain I staggered upwards telling myself that it would be a cop-out if I succumbed. 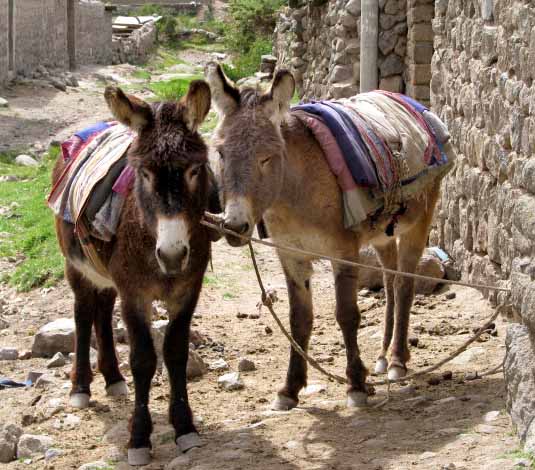 We hit the top about 4.30 pm just in time for the condors to start cruising the skies but the only thing on my mind was cold drinks and a comfy chair.  Dragging my body through backlit fields of green rice  I headed for the comfort zone.  They were closed.  My desperate door rattling antics brought the owner out who took one at the dishevelled mess in front of her and beckoned it in.   Two hours later watered and fed I eased my muscle stiffened body out of the chair and hobbled back to the hostel for a hot shower and a good nights sleep.

It had been a fantastic and thoroughly satisfying day.

2 thoughts on “The Long Trek Down – Cabanaconde and the Colca Canyon, Peru”